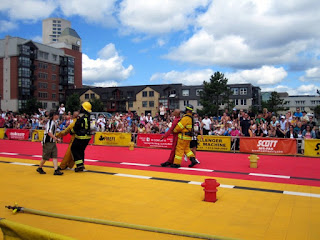 The Scott FireFit Challenge is an internationally recognized fire fighter fitness competition that has been running simulated fire rescue obstacle course races since 1994. This last weekend saw fire fighters from all over Atlantic Canada come to the Halifax Waterfront for the 2010 Atlantic Regional Championship.
On the command, the two challengers race against the clock on identical courses. A great deal of lifting, smashing, and dragging things is then done, with the culmination of the torture being the gruelling Rescue Randy drag to the finish line. The women and the men compete on exactly the same course, in full gear. Rescue Randy weighs 175 lbs, or about 40 more than most of the female competitors. 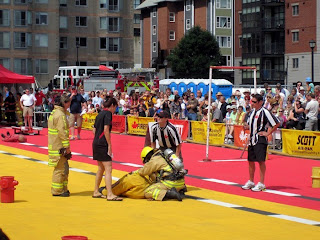 (One of the rookie female competitors slumps over in exhaustion while trying to find the strength to drag the 175 lb "dead weight" of Rescue Randy across the finish line. Much to the delight of the crowd, she would finally make it to the end, after over 9 minutes of struggling.)
(A close, exciting heat. The gloves being used rob the competitors of roughly 50% of their hand strength when they try to haul the roll of hose up to the top of the tower, or when they try to drag Rescue Randy at the end.)
Posted by David Murray at 6:11 PM