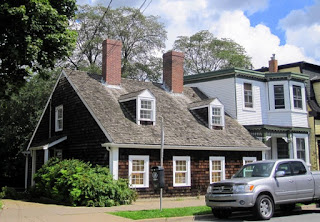 This small cottage on Brunswick Street, in North End Halifax, was the home of Thomas Beamish Akins. Built in the 1790s, T.B. Akins' house is the oldest dwelling in Halifax.
Thomas Beamish Akins was born on February 1, 1809, in Liverpool, Nova Scotia. His mother died when he was 10 days old, after which time he moved to Halifax and was there raised by his mother's family. Akins went on to become a relatively successful lawyer with his cousin, Beamish Murdoch, but neither married or exhibited any interest in public or political matters. He never once ventured outside Nova Scotia.
Akins did, however express a keen interest in history. He entered a contest and won a silver medal from the Halifax Mechanics' Institute for his 1838 "Essay on the Early History of Halifax." Although, his essays were apparently rather boring, they did rely heavily on "primary sources" which still makes them useful to this day. In 1882 Akins was made president of the Nova Scotia Historical Society
In 1811, Sir George Prevost complained to the Provincial Assembly of Nova Scotia that its public records were "in a ruinous state." However, it would take numerous government bunglings before something was finally done about it (are you surprised?) Opposition member, Joseph Howe, distressed by the rapidly decaying condition of the records, moved in 1851 that the province do something to examine, preserve and arrange the documents. Enter Thomas Akins, who agreed to become the first ever provincial Commissioner of Public Records in Canada, for any province, on May 29, 1857.
This was an important moment in Canadian history, since the creation of the Nova Scotia provincial archives predated that of the Dominion's archives by fifteen years. Furthermore, there would not be a second provincial archive created until Ontario established its own in 1903. Thanks to some rare political forward thinking, Nova Scotia now enjoys one of the most complete sets of public records in the country.
Akins maintained his position faithfully for 34 years until his death in 1891. Upon passing away, Akins bequeathed his entire, substantial personal collection to the provincial archives.
For more information on Thomas Beamish Akins, please refer to his biography, here.
Posted by David Murray at 3:05 PM 3 comments: