EP Dave is back! And what a way to rejoin the world - with a road trip! My roommate was leaving back home for Korea, and I thought I would like to treat her to a special trip.

When I was in Korea in 2009, I was guided on a train tour of South Korea by a total stranger. Some random woman I met in the Secret Garden at Changdeok Palace in Seoul, South Korea, befriended me and then invited me on a tour of all her favourite spots around South Korea. It was truly an experience I would never forget, and one that would change my life forever.

I asked the woman how I could ever repay her, since I wasn't exactly loaded with money at the time. She said that I could repay her by returning the favour to any Korean visitors I met in Canada.

So, fast forward to January 2012, and my roommate of the past seven months is about to return home to Korea without visiting the one place every Korean knows, PEI (the home of "red-hair Anne"), and only ever having travelled by bus to tiny Truro. No offense to Truro, as I'm sure it's a lovely town, but the Acadien who lived there before the British stole it from them originally named the place "Village in the burnt wood."  That's probably not exactly the postcard image of Canada she would like to take home with her.

I knew what I had to do. While I couldn't afford the time or the trip to PEI, I did the next best thing - I took take her to Lunenburg.

According to Wikipedia, Lunenburg was one of the first attempts by the British to settle British Protestants in Nova Scotia, back in the 1750s. This makes it somewhat special for two reasons.  First, they actually settled a new area and didn't just steal a settlement from the French or Mi'kmaq, but also this influx of Protestants resulted in Lunenburg being attacked by the Catholics nine times!

More importantly, in modern times, Lunenburg is the best remaining example of a planned British colonial settlement in North America.  It was awarded UNESCO World Heritage Site status, accordingly, in 1995. 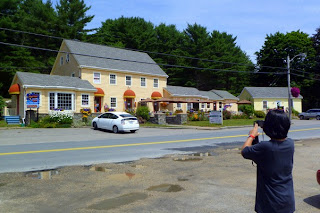 On the way over, we took the Lighthouse Route along the coast and stopped in at beautiful Mahone Bay.  Mahone Bay is famous for its cafe on the side of the road.  No wait... that's not right. 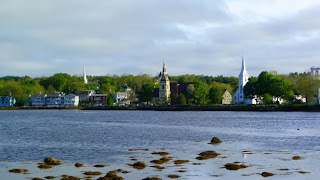 Aha! That's more like it. Mahone Bay is famous for its pretty downtown Main Street, and its three churches more than 250 years old (two-and-a-half of which you can see in this picture).  On a side note: I've been waiting more than two years to take this picture!  Success! 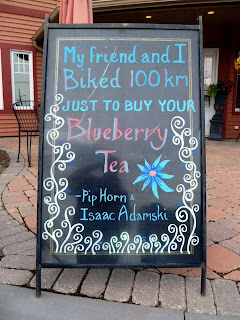 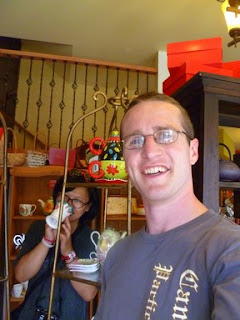 Of personal significance to me was a trip to the excellent independent tea store, The Tea Brewery.  The store's motto is "where there's tea, there's hope."  What more do I need to say?  You can clearly see why someone would have biked 100km just to buy some superb Blueberry Tea.  I only wish I had thought of it first. 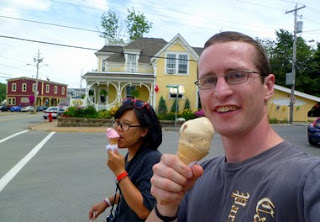 I mentioned earlier the pretty downtown for which Mahone Bay is well known.  That beautiful yellow house in the background is a store.  The entire Main Street is filled with others just like it.  It's well worth an hour of your time to stroll up and down this street if you're ever in Mahone Bay.  You won't soon forget it.  Nova Scotia has some of the most delicious ice cream I've ever tasted, as well. 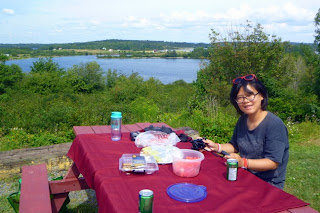 Finally we got to Lunenburg and stopped for a picnic.  Mihwa is an excellent cook and made the most incredible "bulgolgi wraps."  Even more perfect though was the view.  I enjoy Halifax, but this is really what I had pictured when I planned on moving to Nova Scotia. 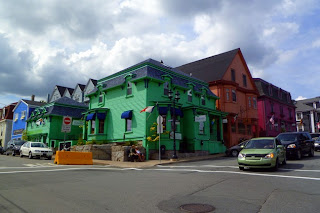 Lunenburg is famous for its well-maintained, 18th Century downtown storefronts, painted every colour of the rainbow (and some extras).  I had visited here as a youth, back in my high school days, but I did not understand the significance of the town at that time, and shamefully I must admit I did not appreciate it as much as I should have.  I'm grateful for the second chance to walk these streets. 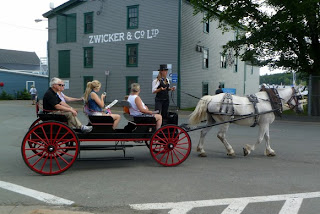 If you don't feel like walking, that's okay too.  Even the tour guides get into the spirit and the costume of the 18th Century.  I was a little disappointed that the horse didn't whinny with an accent though. 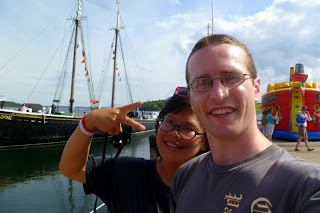 The real excitement was down on the waterfront.  Not only were the Tall Ships in town, but this year marks the 200th anniversary of the War of 1812, during which the British burnt down the White House (hoo-ah!)  There were parties and festivities everywhere. 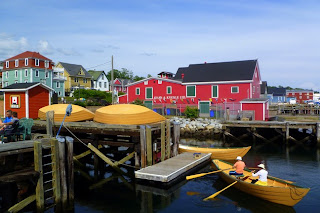 When they aren't patiently enduring the endless stream of tourists, the locals like to row out in their yellow dinghies.  I'm sure my astute readers will notice that the red building in the back ground is the exact same building found on the back of the 1975 Canadian $100 Bill.  It's a little hard to tell from this angle, but trust me, it's the same. 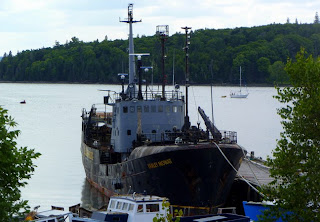 The Bluenose II was under repair, getting a face lift, but I found something even better.  This is the R/V Farley Mowat.  It was formerly the flag ship of Canadian hero Paul Watson's great Sea Shepherd fleet.  The anti-free speech Harper government of Canada stole the ship from Watson in 2008 though, after his crew was caught documenting the government killing baby seals. 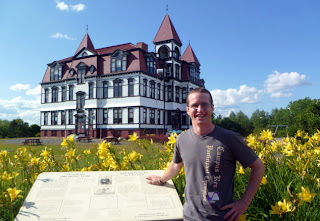 Before we left I insisted on making one last stop - the beautiful Lunenburg Academy.  Perhaps the most remarkable heritage building in the entire province, the Lunenburg Academy has been designated a Municipal, Provincial, and National Historic Site.  Additionally, by visiting the Academy, yet another in a long list of blunders from my youth has been repaired.  I somehow failed to deem it important enough to visit this gorgeous building my first time to Nova Scotia.  I can now check the last item off my list of high school Nova Scotia "oopsies".  Success! 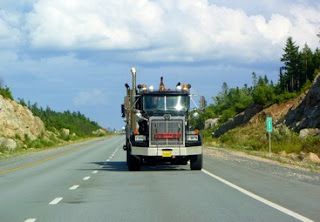 "Oh no! We're gonna die!"  Ha ha!  This is not quite the sight you want to see in front of you when you're travelling down the highway at high speed.  Thankfully it was just a semi-truck being towed backward by another semi-truck.  I have to admit, this was the first time I had ever seen that... weird.
Posted by David Murray at 11:58 AM 3 comments: 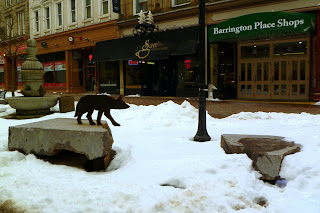 Located in the middle of the cobblestone pedestrian street, Granville, in front of Gallery Page and Strange, this lone wolf was designed and produced by Ontario College of Art graduate, John McEwen.

Especially known for his use of naturalistic objects flame cut from massive slabs of metal, McEwen has produced art out of his blacksmith shop since before the '80s, and has exhibited his works across Canada as well as in Australia, Germany, and England. In 2007 he was honoured with a Doctorate of Fine Arts from the University of Lethbridge.

This particular sculpture is more than meets the eye. The two rock cliffs on which the wolf is walking (buried in the snow) are actually pieces of marble from Cape Breton Island.
Posted by David Murray at 11:43 PM 2 comments:

Today is the 100th Anniversary of the sinking of the Titanic. On April 14,1912 around 12:30 AM, the RMS Titanic hit an iceberg off the coast of Newfoundland and sank on its maiden voyage. Ships from Halifax were some of the first on the scene collecting victims and bringing them back to the city. Many of the buildings in Halifax were used as temporary morgues, until the victims could be identified and burried. Three major cemeteries in Halifax contain the graves of the recovered victims. 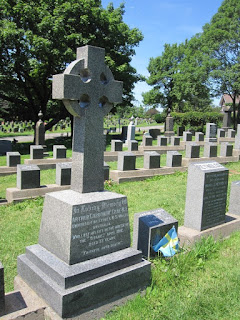 Posted by David Murray at 7:08 PM No comments:

Located just across the street from The Citadel fortress, Royal Artillery Park was acquired in 1799 to provide soldiers quarters, stores, officers' accommodations and a headquarters for the Royal Artillery personnel stationed in Halifax. As an interesting factoid for Haligonians: the old location was across the street from the Grand Parade where the World Trade and Convention Centre is now.

In 1812 work began on the Officers' Mess. Rather, it would have begun, but the War of 1812 got in the way, and so work wasn't completed until 1816. At 196 years old though, it is officially the oldest Officers' Mess in Canada.

My favourite part of the park is being able to walk around and look at the well preserved pieces of artillery from wars past. 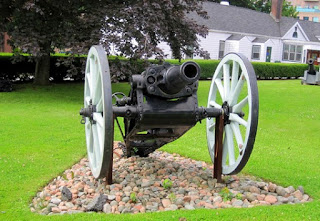 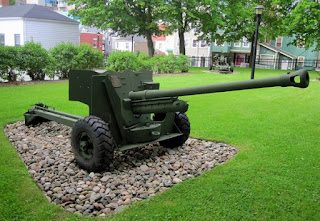 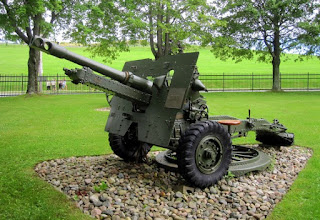