When French explorer, Samuel de Champlain, arrived in the area of Canada known as Acadia, back in the early 1600s, the Chief of the local First Nations people was a man called Membertou. Membertou was a great and wise chief who was also exceptionally friendly and welcoming. He not only welcomed the French immigrants with open arms, but in a show of incredible good will and friendship, he and twenty members of his family agreed to be baptised in to the Catholic faith on June 24, 2010. This "adoption" of Christianity marked the beginning of 150 years of strategic friendship and alliance between the French and the Micmaq people in Atlantic Canada. 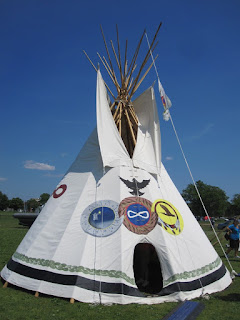 This weekend marks the 400th anniversary of that historic event, and to celebrate the spirit of sharing and openness that made Membertou and his band of Mikmaq people famous, a gigantic three day free outdoor festival was scheduled to take place on the Halifax Commons.
The Membertou 400 Festival contains three days of cultural education, story telling, singing, drumming, dancing, concerts, and an opportunity to purchase authentic jewellery, art, and other items made by local Mikmaq artists and craftsmen/women. The festival is also the largest of its kind ever to be held in Atlantic Canada, and is the realization of a life-long dream for many of those people involved in its creation and development. 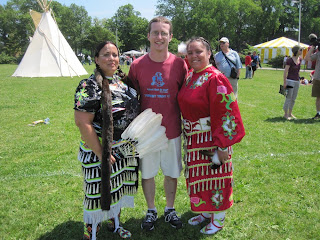 (Each of the women's jingle dresses has 365 bells on it. They are incredibly heavy, and take an inordinately long time to sew on.) 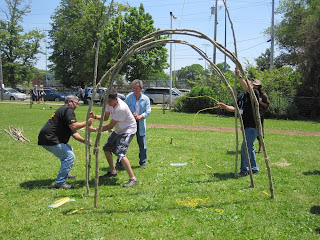 (John Lafford, a Mikmaq from Eskasoni, starts the construction of an authentic wigwam. Over the course of the Festival, Lafford and his team will use the original materials and methods of wigwam making to give visitors a first-hand look at what it took to erect one of these traditional Mikmaq dwellings.) 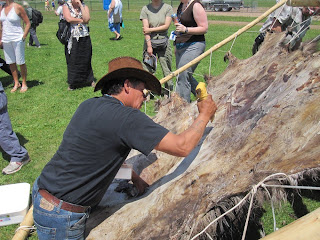 (Hide tanner, Joe Googoo, prepares a bear skin for tanning. The process takes Joe roughly eight days, but he told me that the ancient Mikmaq people could tan a hide in only three.) 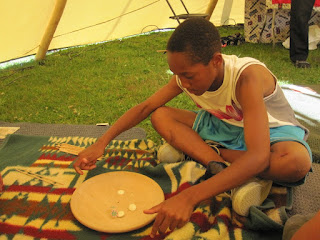 (A young Haligonian tries his hand at the traditional Mikmaq game called Waltes. The wooden dish is made out of rock maple, takes a week to carve, and costs $800. The point of the game is to try to bang the dish on the ground in an attempt to flip the bone discs over. Depending on the way in which the bones land - face up or face down - a player can win points, represented by the wooden sticks beside the bowl. Later, the players can force other players to "pay them" some of their sticks. Depending on the way the bones fall, a game of Waltes can last anywhere from five minutes to five days.) 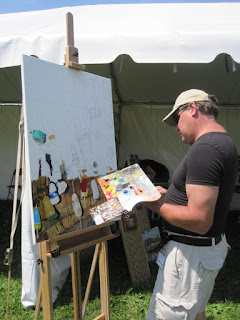 (Local Mikmaq artist Stephen Quellet works on an original painting he'll most likely sell for over $3000, judging by the price of his other works.) 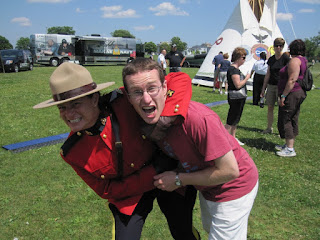 (Aw man! Why are the Mounties always pickin' on me? I wasn't doin' nothin', ya hear me? Nothin'!)
I singled out Friday, June 25, as my day to attend the Membertou 400 Festival, because of a one day only free outdoor live concert being given by Golden Globe and Acadamy Award winning, 3-Time Juno Award winning, and Governor General of Canada's Lifetime Acheivement Award winning rock/folk/country singing dynamo, Buffy St. Marie (visit her excellent website here).
Most people at 69 years old would be at home complaining about their joints, but Buffy St. Marie has a new album and is out touring with a live show that would put some artists, one-third of her age, to shame. Her works like "Up Where We Belong," "Until It's Time For You To Go," and many others, have been been covered by the likes of Elvis Presley, Joe Cocker, Barbara Streisand, Neil Diamond, and Janis Joplin. However, the song I really wanted to see her sing was her famous 1964 anti-war song "Universal Soldier", and I did see it, and now you can see it too, thanks to the video I shot (below).
Another highlight of the weekend, was the absolutely massive competition powwow. Not only was it the largest competition powwow, with some dancers competing for cash prizes, ever held in Atlantic Canada, but it was so popular that the stands were overflowing, and anyone who did not come twenty minutes early had to sit between the stands, or even inside the ring. Needless to say, the event organizers were thrilled with the popularity of the event in which dancers, drummers and singers travel from all over Canada and even the United States came to participate.
(Grand Entrance, and start to the Powwow on Friday. Note the poor Mounties attempting to bounce awkwardly in time with the drumming.)
(A quick video from the inter-tribal warm-up to Friday's Powwow.)
(Another video from the inter-tribal. Some of the women are wearing incredibly heavy "jingle dresses" with 365 bells on them; one for every day of the year.)
I enjoyed the festivities, and the historic, once-in-a-lifetime moment to share in what is likely the proudest moment in many of the participants lives, so much that I stayed outside on the Commons the entire day, right up until the dancing finished around midnight. I was even more impressed that from 1 PM until midnight, every single event ran exactly on schedule, with one event starting the second the previous event finished. It was an incredible display of punctuality not usually seen in Canada, and one that all future HRM event organizers would do well to take note of and copy for their own events.
In conclusion, I will never forget my experiences at this exceptional event, and wish to thank the organizers, as well as the city of Halifax, and the province of Nova Scotia for helping to make it a reality. Here's hoping more great Mikmaq/First Nations events can be seen in Halifax, and around Canada, in the future. 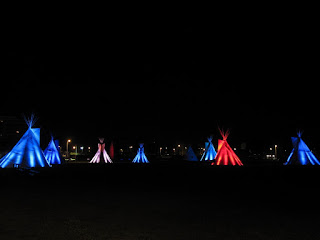 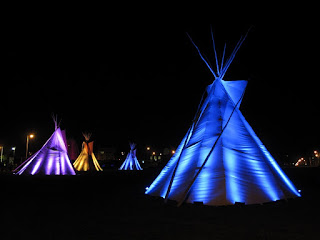 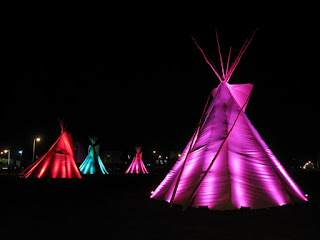 (Colourful teepees on the Commons at night.)
Posted by David Murray at 5:19 PM